In tandem with the launch of her online exhibition on David Zwirner's Platform: Los Angeles, Night Gallery is pleased to present new work by the San Francisco-based painter Christine Wang, placing her recent series of meme paintings in the larger context of her practice. 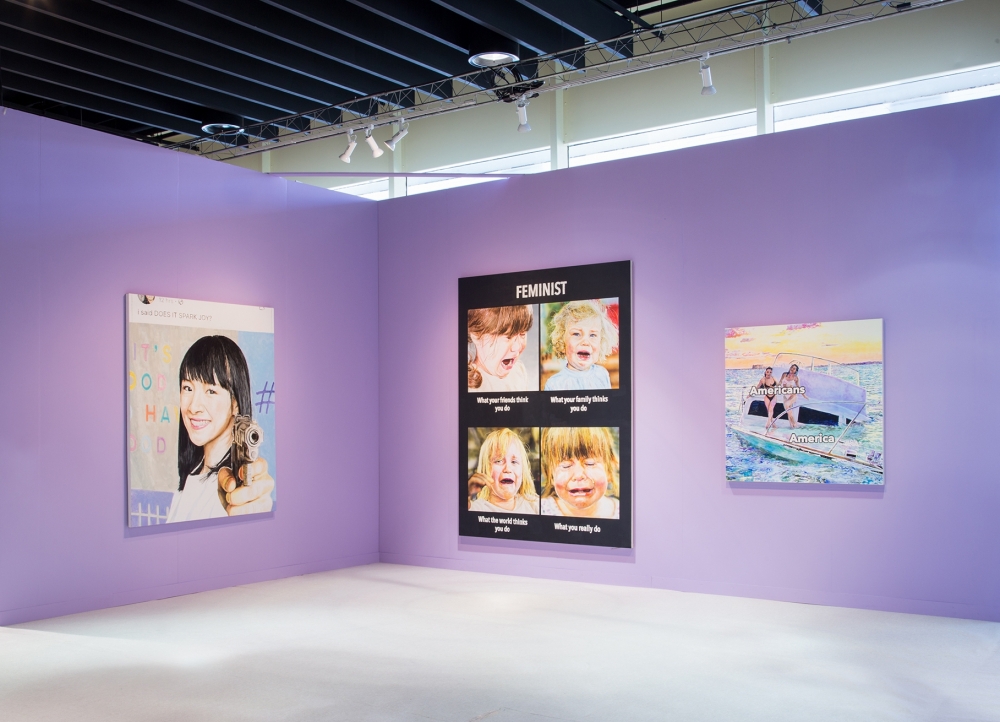 A satirical spirit has consistently characterized Wang's paintings which, through combinations of text and image, reflect the confusion and ambivalence of the contemporary individual amid a barrage of information. A breathtakingly virtuosic painter, Wang’s new works continue an ongoing series of meme paintings, in which the artist stunningly recreates hilarious, arcane images found on social media with an unexpected reverence for light and color that hearkens to the Impressionists.

Wang’s meme paintings directly replicate viral images that she encounters through social media. Recreating these images with stunning attention to light and color, Wang subjects these images to rigorous semiotic scrutiny, magnifying and meditating upon their cultural implications. Seemingly authorless and meant for immediate consumption, memes acquire the voice of the collective. But who is the implied speaker of each meme? Wang’s work reveals the network of assumptions, often racialized and gendered, that memes both reflect and impart so succinctly as to be instantaneous. 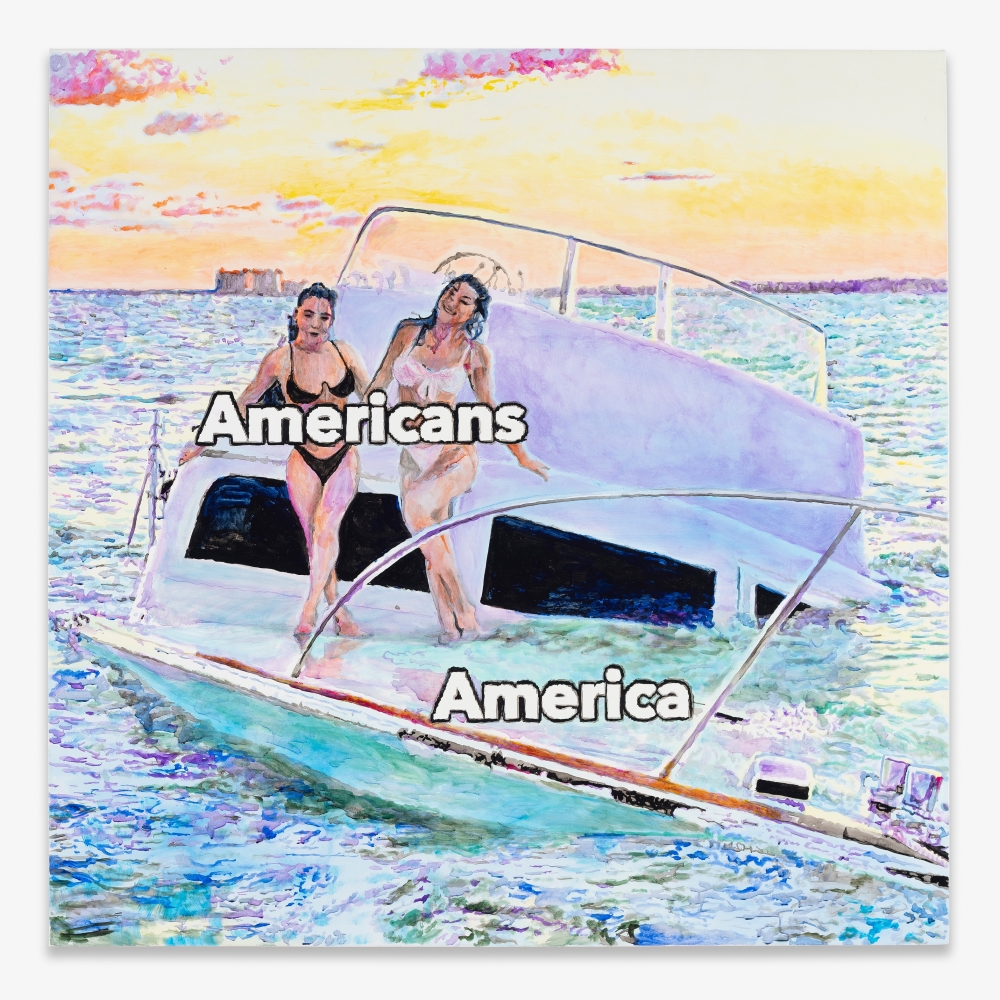 As she selects her source material out of the steady stream of memes that circulate daily, Wang is frequently drawn to images that reflect the hyper-ephemeral nature of viral culture, incorporating celebrities of the hour or freshly-minted catchphrases. Implied in the works is the equally rapid obsolescence of the image, made unexpectedly immortal in Wang’s act of painting.

Wang has described her ongoing interest in memes as an experience of disembodiment. Rather than clarifying a singular subject as the “voice” of all memes, each image complicates and obfuscates the identity and even values of the speaker (who is also the viewer). Given the time and splendor of Wang’s hand painted renderings, even absurdist tableaus reveal underlying prejudices. She writes, "The 'I' in my paintings is confused and abject, slipping between a desiring subject and a sexual object, between a political subject and cog in the capitalist machine. Is the voice of the 'I' the voice of the artist, the viewer, the painting or the celebrity?” The work reveals an identity crisis of the contemporary collective voice.

"The "I" in my paintings is confused and abject, slipping between a desiring subject and a sexual object, between a political subject and cog in the capitalist machine." 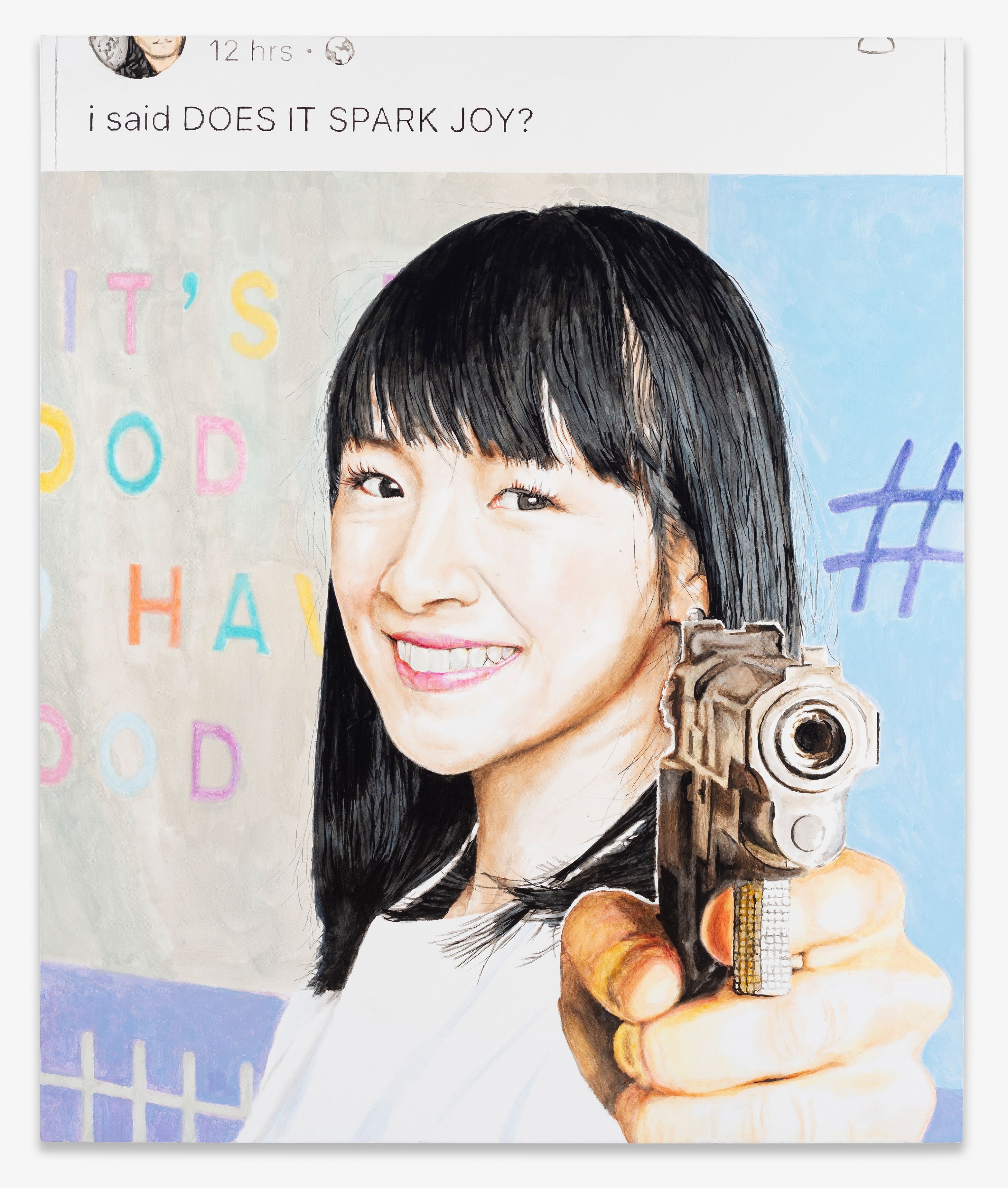 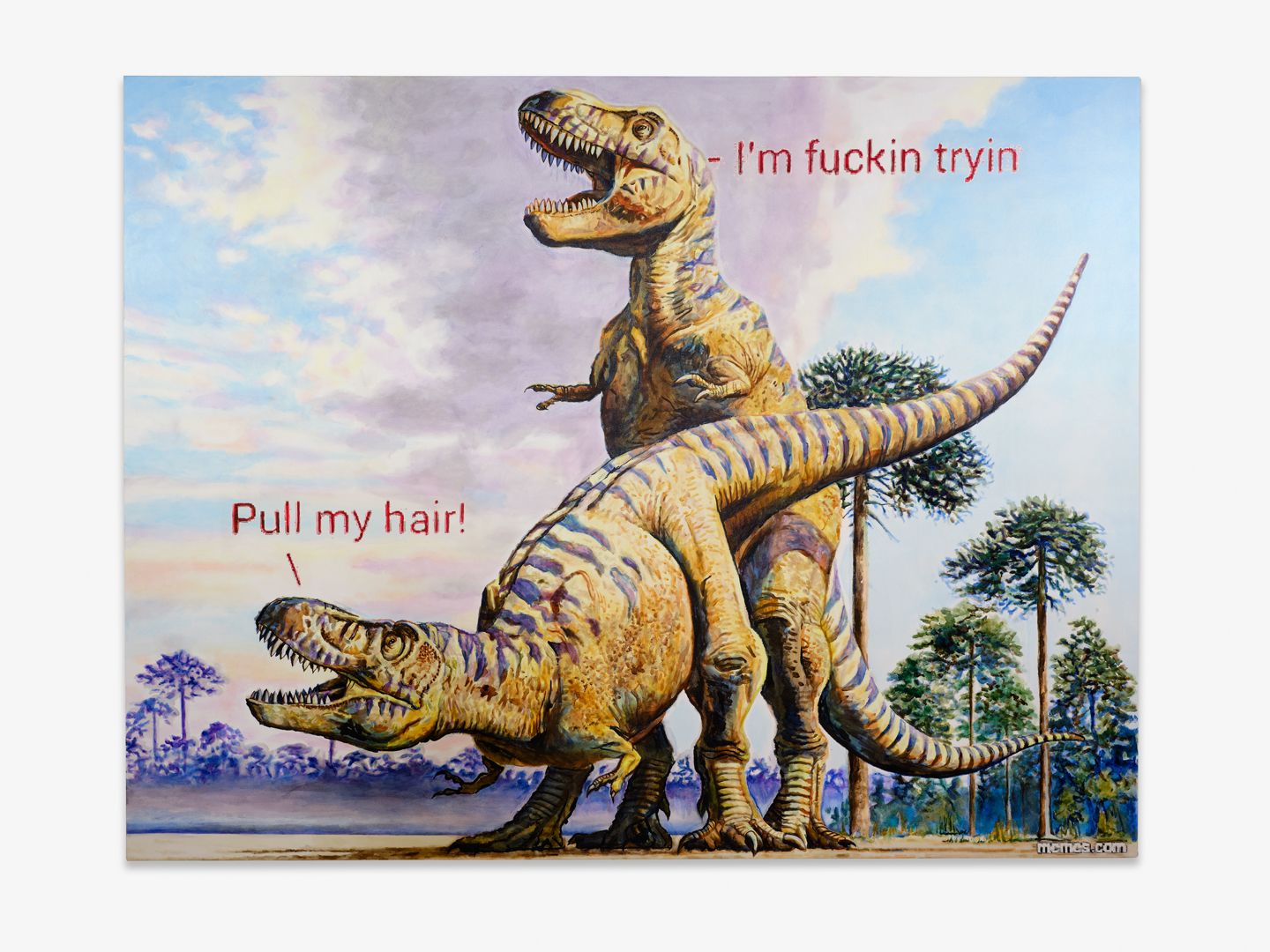 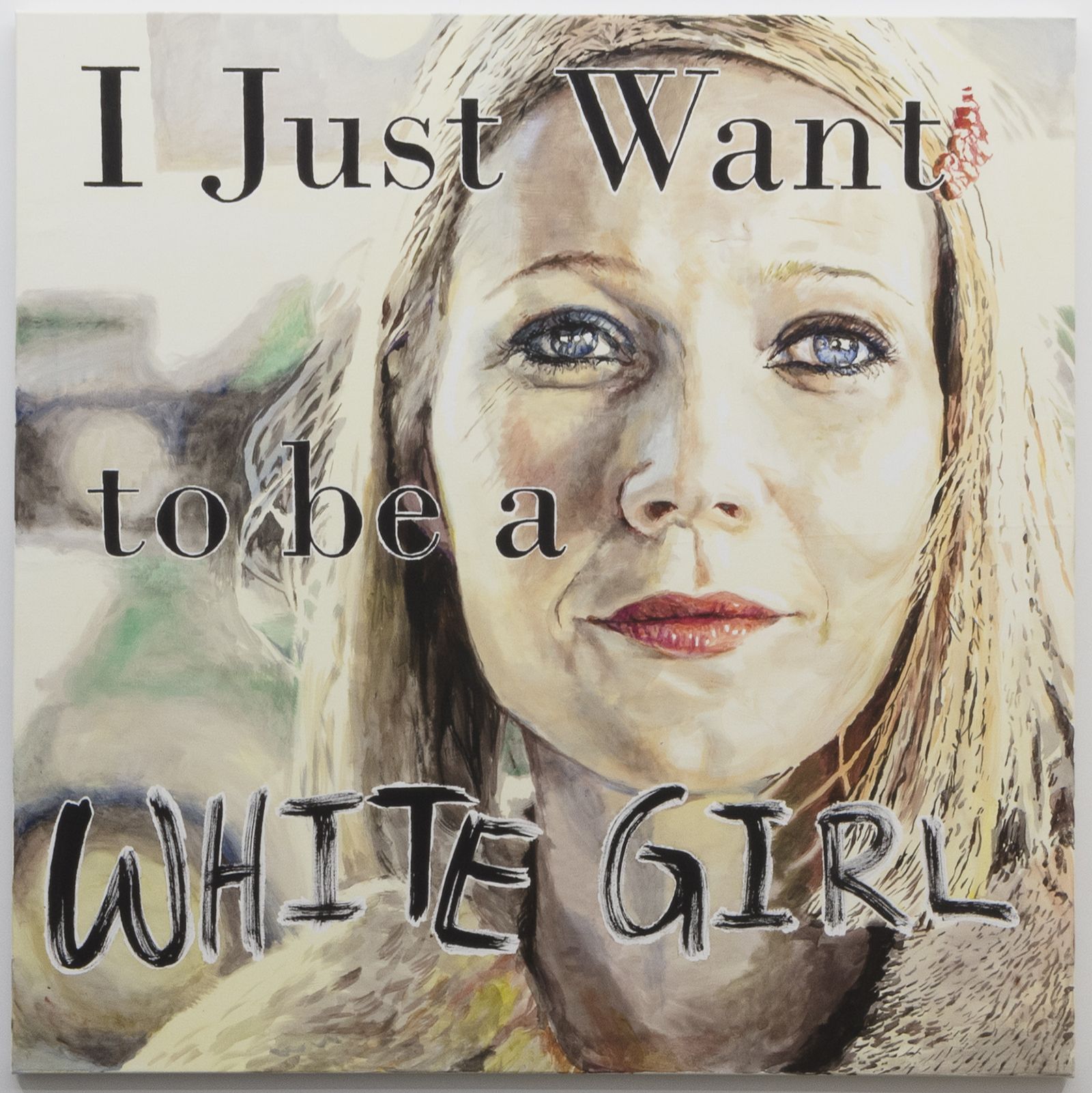 One can find shared gestures and thematic overlaps between Wang’s meme paintings and her earlier work. Her most recent prior series have similarly featured imagery pulled from viral content and mass media, painted with the Impressionist-influenced splendor that can be found in her newest paintings. A 2017 series replicated Facebook comment threads that the artist found online, overlaid with the of-the-moment Pussy Hats that would come to be associated with exclusionary white feminism. Another body of work focused on cryptocurrency, reveling in its trendiness and drawing a parallel to the unpredictable whims art market. By focusing on the niche, of-the-moment intricacies of an uncharted sector of finance, the works make monument to what is destined to become obsolescence, freezing and memorializing what is meant to be a blip on the stock index. Another recent series featured confessional phrases in an anonymous voice overwhelmed by the pressures of identity politics (e.g., “I just want to be a white girl”) scrawled across exquisite renderings of notorious celebrities. Again Wang explores the question of authorship as the viewer is left to wonder if these confessions are Wang’s or someone else’s. Again we find ambivalence, finding critique and compassion in the voice of her anonymous speaker.

“I am inspired by my own feelings of guilt, greed and shame. These negative emotions point to ideological paradigms that I have inherited, internalized or reflect. I make the values of society visible by underscoring my own embarrassing thoughts.” 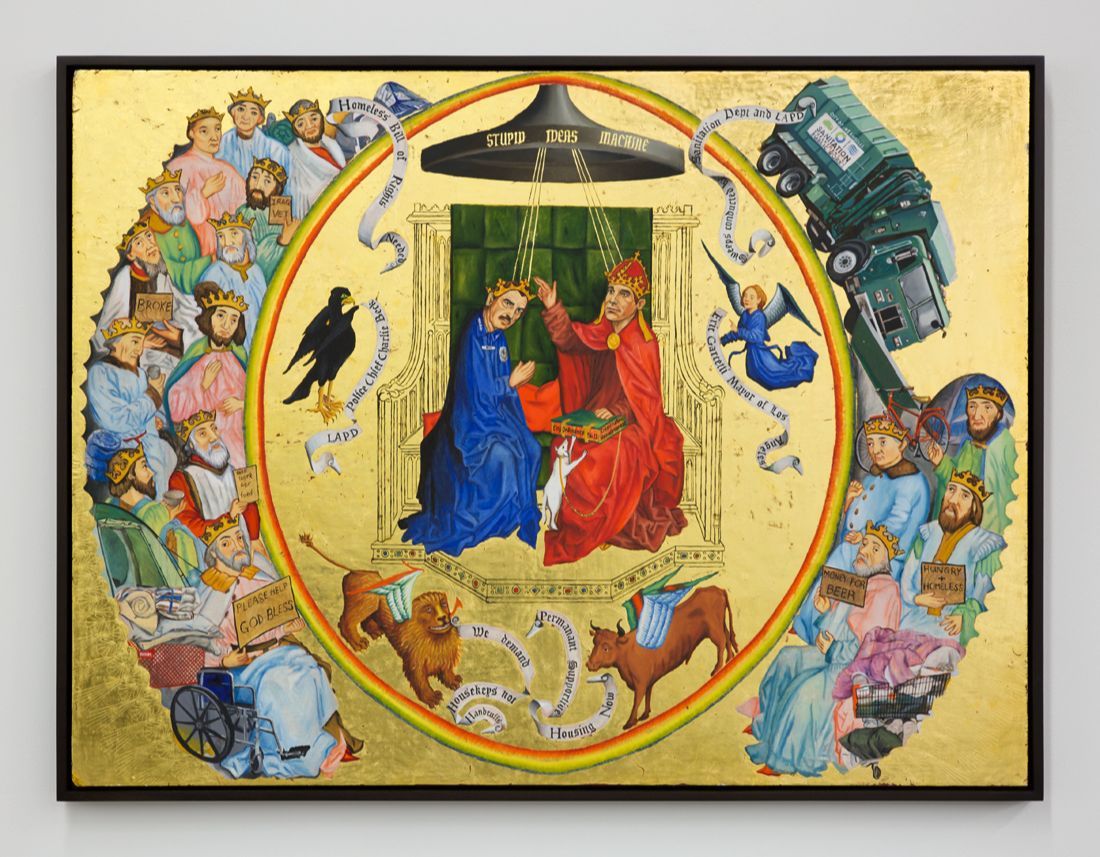 Wang has also demonstrated her virtuosity with series that require entirely different painting techniques. The works appearing in her 2016 exhibition "Devotional Art for Your Home" adopted the operatic terms of 15th-century European in oil and gold leaf, updating their imagery to include contemporary issues and public figures. Her first solo exhibition at Night Gallery, "I Want that Bag", in 2014, featured collage-like paintings, some on a quilted patchwork of fabrics all sourced from Qatar, where the work was created during an artist fellowship. Over many of these paintings are confessional scrawls, alluding variously to the artist’s family history, geopolitics, and the impulses of an unidentified consumer who voices the exhibition’s title as well. 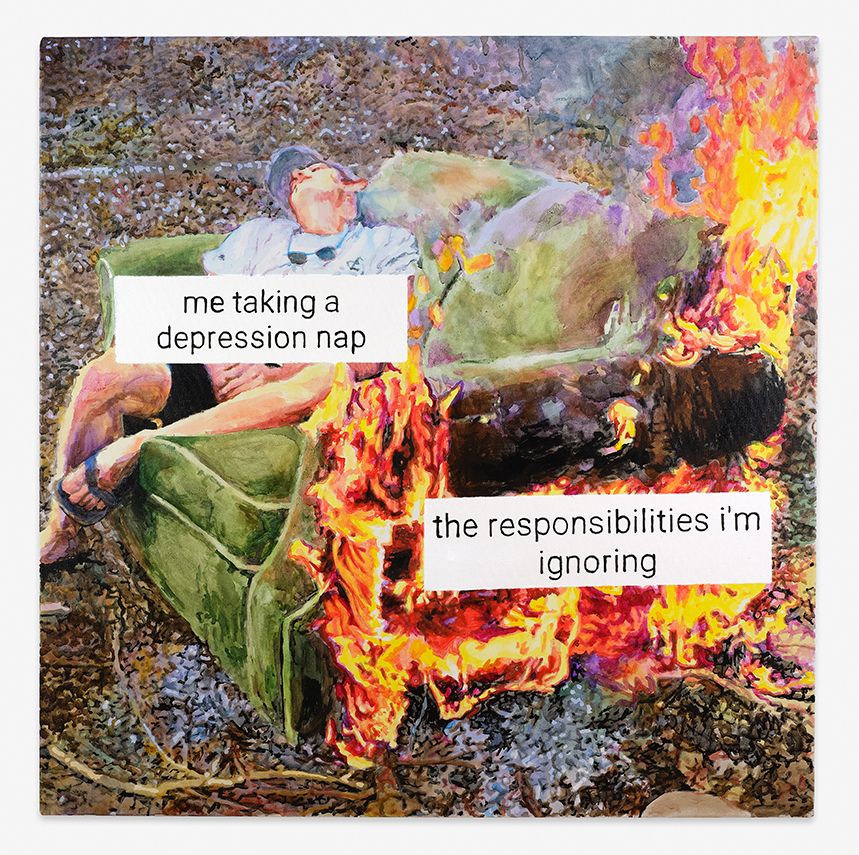 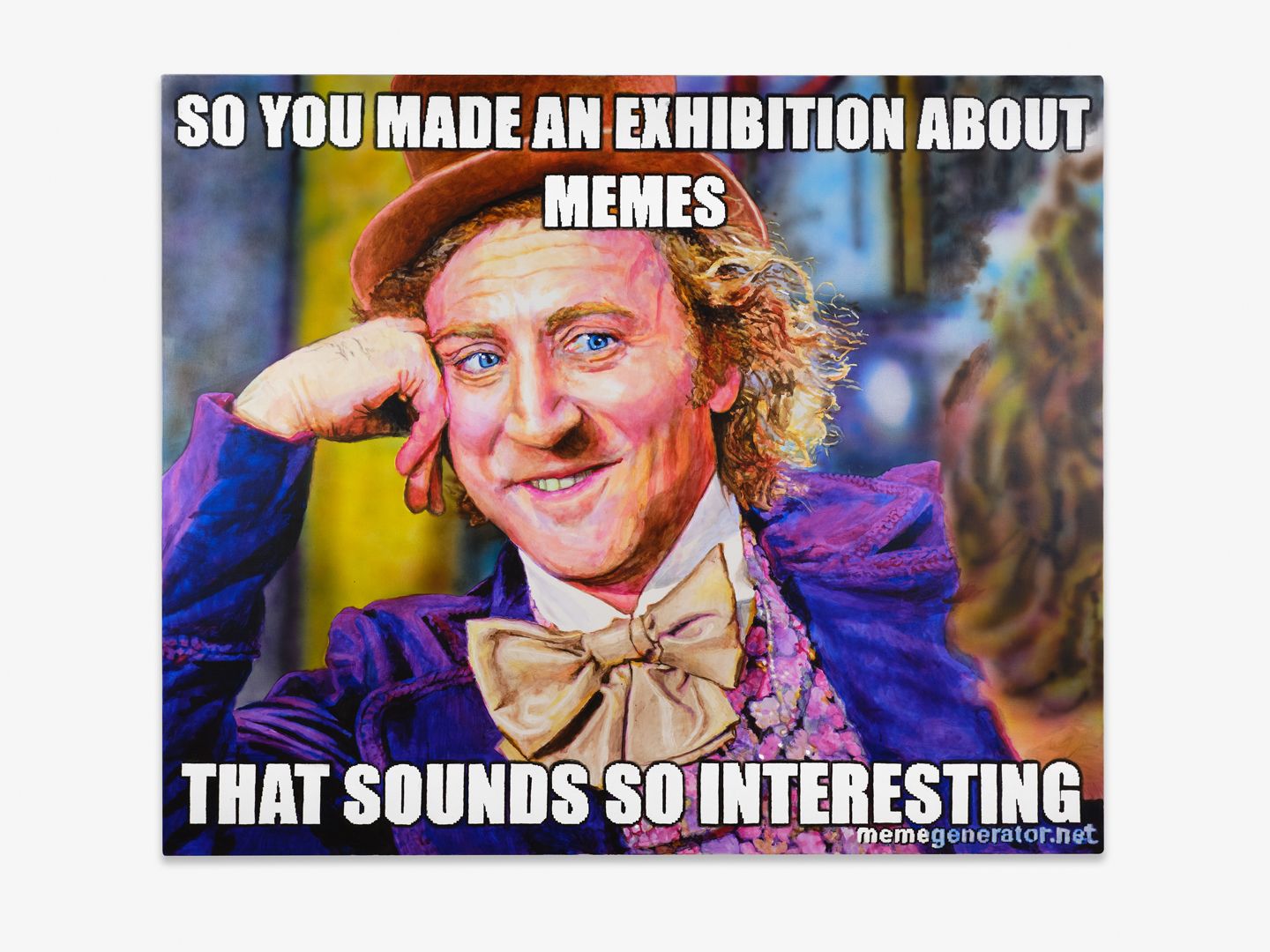 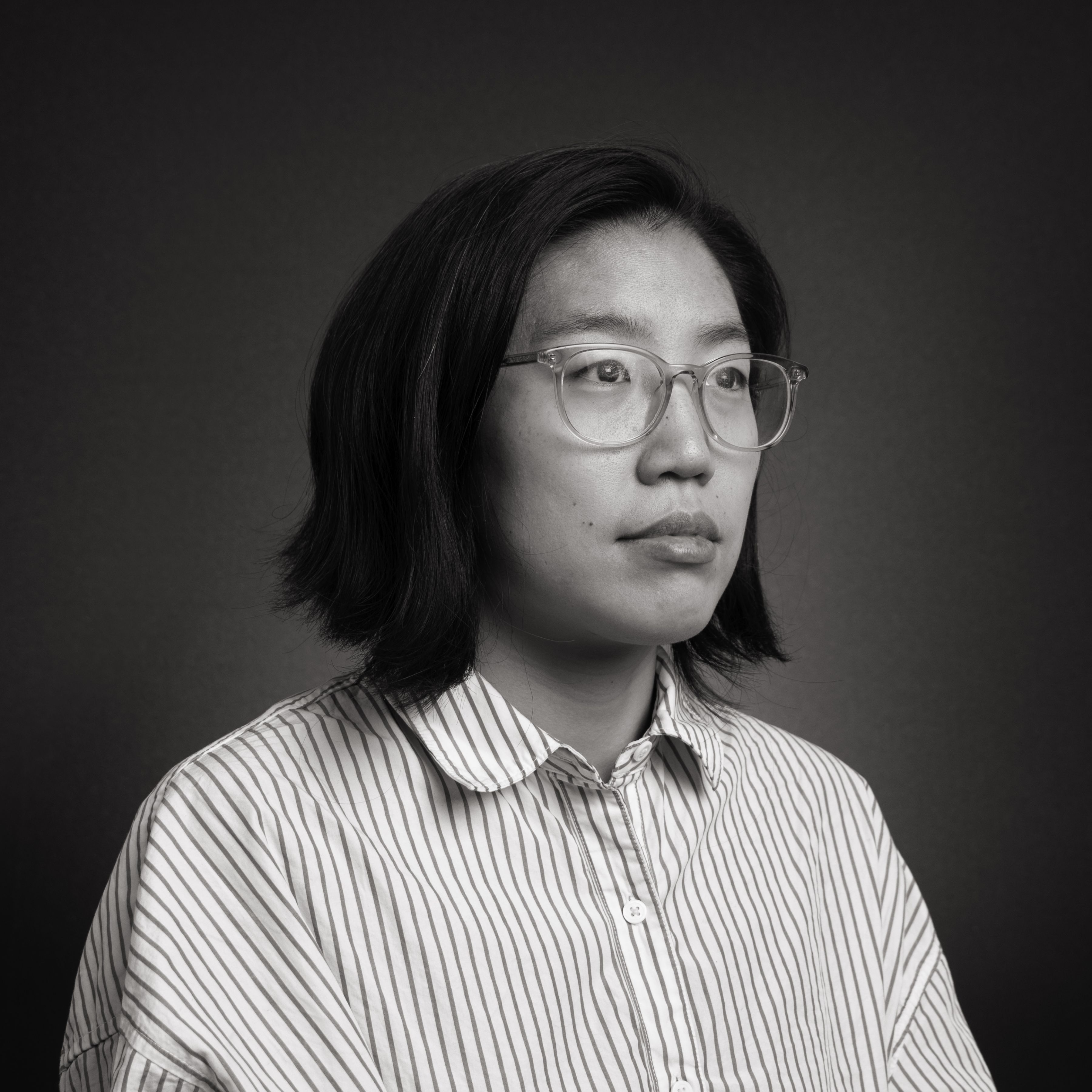 Christine Wang (b. 1985, Washington, D.C.) has had solo exhibitions at Night Gallery, Los Angeles; Galerie Nagel Draxler, Berlin and Munich; Reiseburogalerie, Cologne; Hamad Bin Khalifa University Student Center Gallery, Doha, Qatar; Ever Gold Projects, San Francisco; and Magenta Plains, New York, among others. Recent group exhibitions include Rachel Uffner Gallery, New York; M. LeBlanc Gallery, Chicago; Et Al, San Francisco; the African American Museum in Philadephia; and Foxy Production, New York, among others. In 2020, Wang's solo presentation at The Armory Show was awarded the Pommery Prize. In 2019, she was a finalist for SFMoMA's SECA Art Award, and in 2017, she was nominated for the Paulo Cunha E Silva Art Prize. Wang has been an artist-in-residence at Skowhegan School of Painting and Sculpture, The Jamaica Center for Arts and Learning, and Chashama North. She lives and works in San Francisco.